This post has been adapted from a talk I originally gave at codebar, which is a non-profit initiative that facilitates the growth of a diverse tech community by running regular programming workshops. It is targeted to those who are learning to code.

This post is in two parts, a little history, followed by some live command line examples.

Way back in the 60s - 70s, computers were becoming more than just calculators.
They could save files to disk, have multiple running applications with multiple users, but these things are difficult to control and easy to break. Thankfully, there was a very smart idea to cover all these internal bits in a nice usable shell. 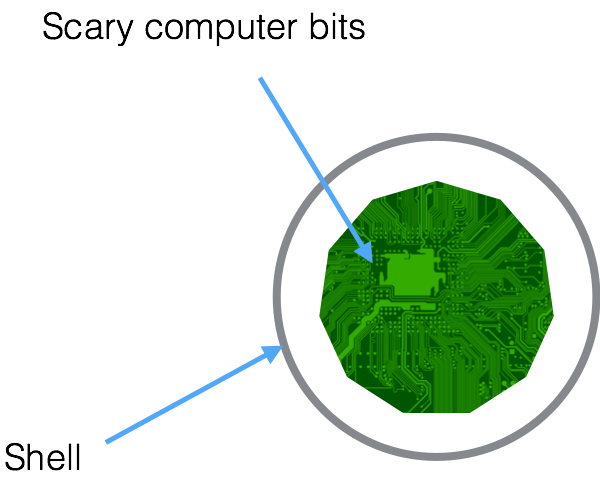 These shells have since evolved to be Windows desktop, Mac OS, all the touchy screeny bits of your phone etc. Basically all the user interaction stuff. They make your computer easy to use and (reasonably) hard to break.

But before these shells were pretty and graphical, they were command line. You would type something and get a response. They looked like this: 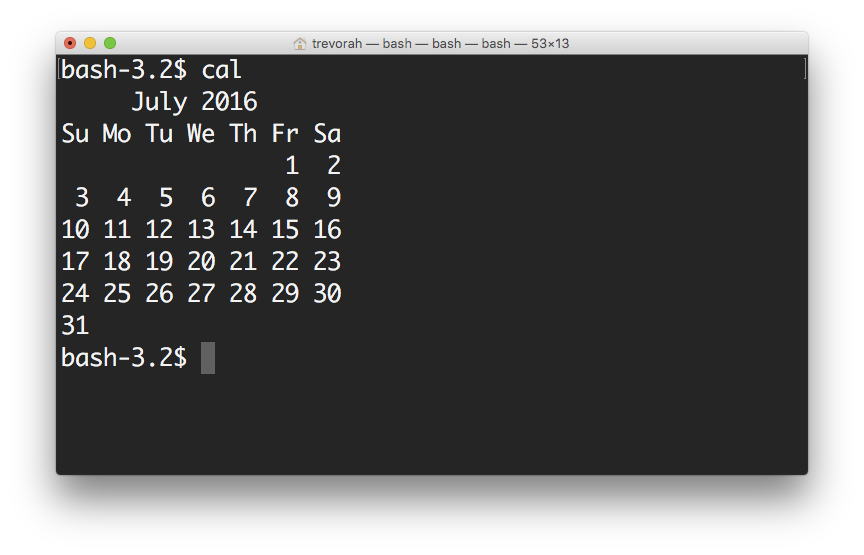 Here's a shell running the cal command and printing out a calendar.

This particular shell is called bash which is short for "Bourne Again SHell" because before that there was the "Bourne Shell" by Stephen Bourne. Never let software engineers name things that last.

There's a rich history of shells, and these "Unix style" shells began with Unix System 1's shell in 1969. But even that was influenced by older programs such as RUNCOM. If you've ever noticed that some config files end in "rc" (e.g .vimrc), thats why.

If these shells have changed since the 1960s, then why do developers keep on using them?

Because they haven't really changed since the 60s. Graphical interfaces for your phone or computer fashionably change with every update (with usability improvements), but command line shells don't. When you are scripting things or dealing with an entire farm of servers, you really don't want your (user) interface to change as it will break your scripts.

Thankfully, both command line and graphical shells are both shells around the same thing, so we can use them both interchangeably. Here's some examples to show what command line shells can do.

We can start small and just get the computer to repeat what we say:

The computer also has some special words like $RANDOM:

Bear in mind that almost all of these commands are just little programs that accept some input and emit output. You can find out where they are using which:

With Mac OS, we can even make the computer say stuff:

There's also cat which will print out file contents. It's from 1971.

We can use it to read some built in files on your computer:

That's every word that your computer knows! That list is pretty long (almost too long to scroll!), but we can use the head command to see the top of it:

And there is an opposite command, tail:

It would be neat to just get the last word. tail can do this, but requires a special argument. We can look it up using man:

I have no idea how to pronounce "Zyzzogeton", but we can get the computer to do it using the say command. We just pipe the output of tail into the input of say using the pipe character (|):

Neat! We can even have multiple pipes. We can pipe cat into tail into say and get the same result:

Now if we wanted to get a random word, we could get all the words up to a random point and then get the last word of that. We can do that with head and tail:

cat reads files from your hard drive, but we can use curl to read files from the internet. Here's a url for a file that contains the full works of shakespeare:

If we used this curl as an input to our random word pipes, we can get the computer to quote us random lines of shakespeare!

We can achieve quite a lot with only a few commands. This philosophy of having small reusable programs that can be combined together has lasted for a long time, much like lego bricks. By combining the right ones, you can make quite an impressive program!